The third Trinidadian captain to sail around the world.

The third Trinidadian captain to sail around the world was Michael Hope-Ross. He made a four year circumnavigation in the mid-eighties on his trimaran Angel. The Piver designed boat was built locally by his father Malcolm, and was launched at Los Iros beach in south Trinidad.In 1982, Michael set off on his circumnavigation. Although sailing mainly single-handed, he once took on some crew hoping to drop them to Darwin, Australia. Unfortunately the boat struck a part of the Great Barrier Reef after leaving Cairns. They managed to drag it off and make a temporary patch, after which Michael made his way to nearby Thursday Island where he effected more permanent repairs. He was then able to safely complete his voyage.

Sadly, several years after his circumnavigation, Michael passed away in an accident whilst exploring the Grand Canyon in the USA. He was a true adventurer till the end. Photo and story courtesy Pierre La Borde. #ttsailing#trinidadsailing 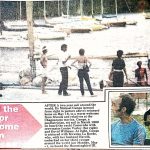 Second Trinidadian captain to sail around the world.News 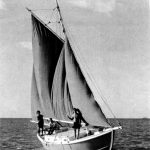 The first Trinidadians and West Indians to sail across the AtlanticNews